"We must not be silent any longer, we must be bold, we must fight back!"

Thank you for joining us today.

We have a very special guest with us, but before I introduce him, let me read you something I came across recently.  I don’t remember where I read this, so I can’t give attribution.  And, yes, these words are plagiarized:

Language is a powerful weapon. Words and expressions convey ideas that reflect a culture, a morality, and a worldview. Liberal media have long used their position of power to change language and impose their distorted worldview upon America.

America – that means all of us in this room – is engaged in a serious culture war where the left wants to change America toward a more Marxist, a more liberal, and a more egalitarian society. Words are particularly powerful in pushing this political agenda. Think how the word “equity” has replaced the word “equality’!

These words also introduce a philosophical worldview in which people accept no moral responsibility for their actions. These changes favor the idea that everything is determined by social and power structures and that we are all engaged in a Marxist class struggle.

We must not be silent any longer, we must be bold, we must fight back!

I don’t know about you, but if we aren’t bold, if we don’t fight back but just sit idly by and allow this craziness to continue, we are enabling our own suicide and the suicide of America!

But now to our guest speaker!"

"It is now my pleasure to introduce Mr. Addul Ali to you.
He is no stranger to adversity and hard times:

1. He graduated valedictorian from high school.

2. He entered the army at 17 years old, where he learned the importance of mission, teamwork, and dedication.

3. He signed a major record deal with Sony Records.

4. Realizing more had to be accomplished, he moved from New York to North Carolina where he settled in Kannapolis, married, started a family and a business.

5. Mr. Ali is a member of the Masonic Order and was a Worshipful Master of St. Johns Lodge 204, when he was appointed to the City of Kannapolis Community Development Commission.

6. He was later nominated and elected to serve as the Chair of that Commission.

7. After recognizing that he identified with the core values of the Republican Party, Mr. Ali joined the Cabarrus GOP.

8. He was elected to the Cabarrus GOP executive committee for his work supporting Republican candidates in the county and the 8th Congressional District.

10. He is the Board Chair of the Positive Youth Transformation, Inc., North Davidson Academy, and several other regional and national nonprofits.

11. He serves as State Chapter Advisor for BLEXIT NC.

12. And, of course, he is the Operations Director for the Frederick Douglass Foundation of NC.

13. Today, Mr. Ali is here with us to speak of our unfortunate use of the language of the Left to frame our own issues and positions on policy. 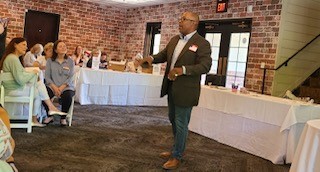 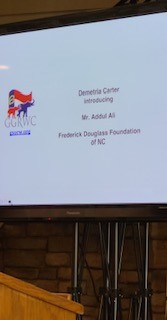