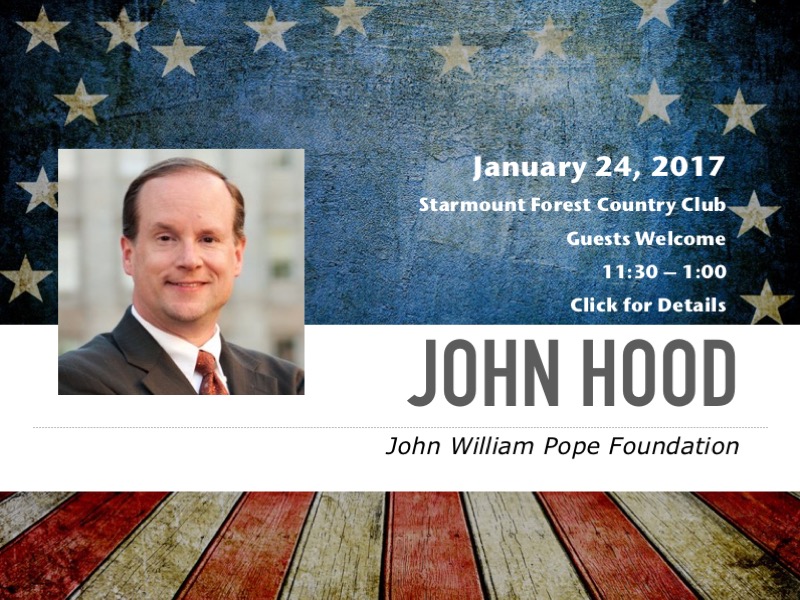 We meet the fourth Tuesday of the month except for July and December. These meetings are open to members and their guests at no charge.

Option to have lunch in the Starmount Dining Room after the meeting.

John Hood is president of the John William Pope Foundation, a Raleigh-based grantmaker that supports public policy organizations, educational institutions, arts and cultural programs, and humanitarian relief in North Carolina and beyond.

Hood is also chairman of the board at the John Locke Foundation, a North Carolina think tank that issues reports, hosts events, produces broadcast programs, and publishes Carolina Journal, which serves an audience of nearly 150,000 North Carolinians through its print, online, and radio editions. Hood helped found the John Locke Foundation in 1989 and served as its president from 1995 to 2014.

Since 1986, Hood has written a syndicated column on politics and public policy for North Carolina newspapers. It currently appears regularly in the Winston-Salem Journal, High Point Enterprise, and newspapers in more than 60 other communities. He also writes a regular column, “Free & Clear,” for Business North Carolina magazine and serves as a weekly panelist on “NC SPIN,” a political talk show broadcast on 26 television and radio stations across the state.

Hood is the author of seven books. The most recent one is Catalyst: Jim Martin and the Rise of North Carolina Republicans (2015). Hood’s other books include Our Best Foot Forward: An Investment Plan for North Carolina’s Economic Recovery (2012), Selling the Dream: Why Advertising is Good Business (2005), Investor Politics (2001), The Heroic Enterprise: Business and the Common Good (1996), and two volumes of family history.

Hood writes and comments frequently for national media outlets, particularly National Review and its blog “The Corner.” His articles have appeared in both magazines — such as Readers’ Digest, The New Republic, Military History, and Reason — and in newspapers, including The Wall Street Journal, USA Today, and The Chicago Tribune.